The thing about me is that I love breakfast so much but breakfast happens in the morning… And morning is so, just, there. I mean, it’s bright and early and all I can do is blink slowly at it until my brain rolls out of its own metaphorical bed, or maybe until I can manage a cup of coffee. Despite my inability to function as quickly in the morning, I am a strong believer of starting the day with a good meal! If I sleepily shatter a glass container of hot sauce on the floor or if a few eggs roll off the counter in the pursuit of eating at so early an hour, so be it. (very sad true stories, guys).

I do miss the Belgian style waffle maker from my mom’s house, but I’m really happy to have moved in with Boyfriend, who happened to own this (and a toaster!! I’m a lucky gal). The first few times I used it, the waffles came out kind of floppy with some square indents on them. It was kind of depressing. But since then, I’ve managed to alter my recipes to help this basic waffle maker produce some fine, crispy on the outside, puffy on the inside, waffles! 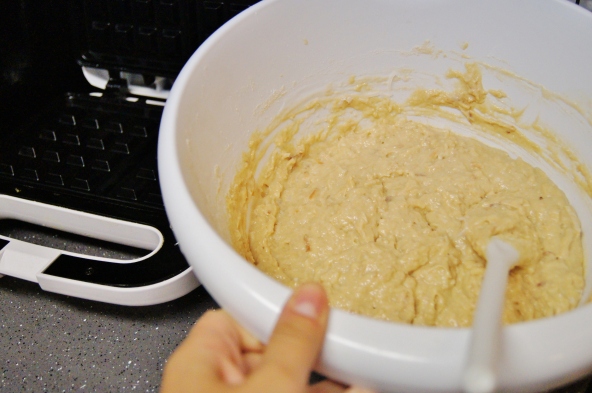 I think the trouble with waffle makers like this is that they may not heat up as much or as fast as the fancier kinds. So I let it heat up longer before beginning (longer than it takes for the green “go” light to go on) and I also leave the waffles in for a few extra minutes past when the waffle maker says it’s ready. Just keep watching it to make sure it doesn’t brown too much! I also reduce the amounts of some of the moisture-contributing ingredients so the waffles can be a little firmer. The first ones I made with this machine had a lot of pumpkin in them and they were quite floppy and sad (though still yummy). 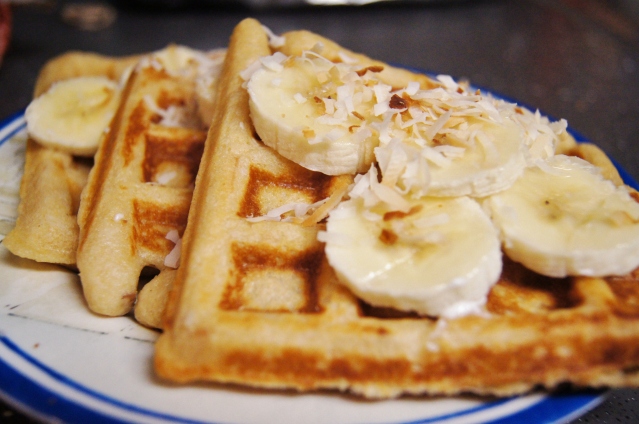 I know it’s hard to function in the morning, but waffles are worth it.